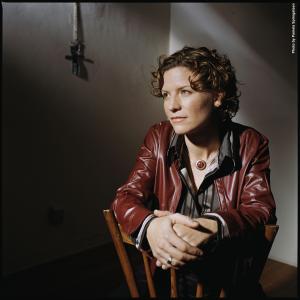 Catie Curtis, born and raised in Saco, Maine, began playing guitar and writing songs at the age of 15. Trading back and forth between her high top sneakers and her 6-string acoustic, Catie spent as much time during her college years playing hoops with the Brown women's basketball team as she did playing her songs at the campus coffeehouse. After graduation, Catie moved to San Francisco, CA, waitressing at a diner by day and writing songs by night. A year later, Catie succumbed to the pull of her New England roots, finding a home in the thriving Boston acoustic music scene. While employed for a few years as a social worker, Catie recorded From Years To Hours and Truth From Lies on her own indie label. In 1996, EMI/Guardian Records signed Catie and released Truth From Lies internationally. Her eponymous second album with Guardian contained the single "Soulfully," and helped break Catie into the national spotlight. The New Yorker deemed her a "folk-rock goddess," and a career was officially launched.

Since then, Catie has toured with Lilith Fair, and with artists such as Dar Williams and Mary Chapin Carpenter. Her songs have appeared in numerous television shows (Dawson's Creek, Felicity, Grey's Anatomy, and Alias), and independent films (500 Miles to Graceland, A Slipping Down Life). She tours steadily, headlining clubs, theaters and acoustic listening rooms, building and nurturing a strong and loyal fan base around the US and Europe. She released two records on Rykodisc Records, "A Crash Course in Roses" (1999) and "My Shirt Looks Good on You" (2001-from which the single "Kiss that Counted" won a Boston Music Award). Catie released "Acoustic Valentine" on her own Sam the Pug Records in 2003. "Dreaming in Romance Languages" was released on Vanguard in 2004, and Catie has recently recorded a new CD, entitled "Long Night Moon," which will be released in August of 2006.  She was recently awarded the 2005 International Songwriting Competition's Grand Prize for a song from the upcoming CD which she co-wrote with Mark Erelli.  The song, "People Look Around," is about social issues and Hurricane Katrina.  It took top honors among 15,000 songs from 82 countries.

Catie lives in the greater Boston, Massachusetts area with her partner and two daughters.