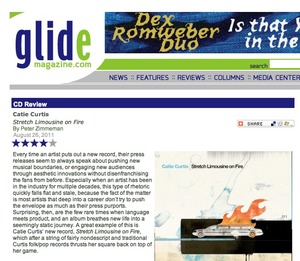 Stretch Limousine on Fire is a definite result of someone with conviction that they’ve put in their time but that they’ve still got plenty to say. With that, though, it’s important to mention that what makes Limousine so compelling is Curtis’ curiosity-- for life, love, freedom, understanding-- curiosity that keeps her from ever being preachy and makes the listener feel like they’ve tapped into a moment of introspection rather than polished ideology.

Every time an artist puts out a new record, their press releases seem to always speak about pushing new musical boundaries, or engaging new audiences through aesthetic innovations without disenfranchising the fans from before. Especially when an artist has been in the industry for multiple decades, this type of rhetoric quickly falls flat and stale, because the fact of the matter is most artists that deep into a career don’t try to push the envelope as much as their press purports. Surprising, then, are the few rare times when language meets product, and an album breathes new life into a seemingly static journey. A great example of this is Catie Curtis’ new record, Stretch Limousine on Fire, which after a string of fairly nondescript and traditional Curtis folk/pop records thrusts her square back on top of her game.

Curtis emerged in the mid-90s within the female singer-songwriter scene, rooted deeply in the between New York City and Boston. Alongside contemporaries such as Ani DiFranco, Dar Williams, Melissa Ferrick and Lucy Kaplansky, Curtis developed an audience who enjoyed her relatively sunny disposition and equally inviting songs. Her voice has always been quite singular, with a rich color to its airy falsetto. Perhaps she never rocketed into the next wave of stardom (as seen by many of her fellow folksters) because she seemed perpetually nice. While DiFranco butted heads with patriarchal notions of social structuring, Ferrick dove into the trials of full-on heartbreak and Williams sought to bridge depression with sheer honesty, Curtis always felt like the one you could rely on for giving you a good pep talk. Regardless, she’s been able to sustain a fairly healthy career, through label changes and the radical shifts of the industry.

Maybe it’s because Curtis has such a stable fanbase and career trajectory that she feels ready to test the waters again. Stretch Limousine on Fire is a definite result of someone with conviction that they’ve put in their time but that they’ve still got plenty to say. With that, though, it’s important to mention that what makes Limousine so compelling is Curtis’ curiosity-- for life, love, freedom, understanding-- curiosity that keeps her from ever being preachy and makes the listener feel like they’ve tapped into a moment of introspection rather than polished ideology. Curtis invites those who undertake this record to see her not as “mature” or “sophisticated,” but rather wide-eyed at the wonder of creation and the strength of relationships, without ever veering into the realm of the naïve. It’s a delicate balance so often erred on either side, but on the majority of these songs, Curtis really gets it right.

Conceptualizing of Limousine as it would be on a vinyl release is immensely helpful in dissecting its structure, and it’s also quite revealing about what works on this album. Side A, or tracks 1 - 5, are wholly spectacular, driving home a range of emotions and painting in a variety of hues. “Let It Last” rejects the vocabulary of “classic Catie Curtis pop single,” with Thomas Juliano’s beautifully restrained slide guitar playing against Curtis melody and Mary Chapin Carpenter’s guest harmony vocals. Rather than be a major-key proclamation of how great things are, Curtis chooses to return to a minor key and a vocal tinged with melancholy. “Highway del Sol” opens with a gentle and alluring acoustic guitar, but it builds into this churning, atmospheric exploration about life’s mysteries and unexpected turns. Julie Wolf’s keyboards and Jay Bellerose’s drums provide a stunning backdrop, and the song feels full of possibilities. The title track conjures the bouncy swing of mid-to-late 90s Aimee Mann with a great beat. But it is the fifth track-- “River Wide”-- that is the truly remarkable backbone of Limousine. It’s a stripped-down ballad with Curtis on vocals and Glenn Patscha on piano that recalls Paula Cole’s later work. The lyrics explore the familiar discussion of childhood nostalgia and the desire to grow and create. And even though it uses its main motif as a bird taking flight, Curtis never becomes trite or hackneyed, even though she employs such a cliché. It’s a definite tour de force, and the absolute highlight from the record.

Side B, or tracks 6 - 10 don’t fare as well as the initial five, but they’re never banal. “After Hours” chronicles the death of a close friend, but doesn’t really go anywhere. “I Do” is the conventional “I am so excited to be married” type of song, and while the melody and structure is pleasant enough, it’s not quite at the level of the opening tracks. “Wedding Band” covers much of the same territory, but features some frustrating lyrics, such as “I could have fallen for someone untrue / I’m so damn lucky it was you.” It’s this type of throwaway line that would be innocuous were it not for the easy admission of the author’s poor judgment before finding the “perfect one.” It’s a widely used fallacy and one that is vexing to see Curtis employ, but thankfully much of the song doesn’t follow suit.

Closing track “Seeds and Tears” returns to the caliber of Side A, with an utterly enchanting melody and thoughtful, weighty lyrics. It’s another great example of working with cliché and creating something new and fresh, as she sings about life after death. Glenn Patscha returns on a perfectly subtle piano line and Lorne Entress provides the right flourishes on drums and percussion. It’s this type of song that Curtis should be focusing on. Even though it’s wildly exciting that she’s finally able to marry her partner and be recognized in the eyes of the state, her best work (at least on Limousine) comes when she sings about what she knows. Every artist is allowed a certain level of slack for the moments when they encounter major life changes (becoming a parent, getting married, etc.), but it’s important that they learn to edit the sentimentality if it veers too heavily into the nauseating kind. Thankfully, Curtis displays that grasp in assembling Stretch Limousine on Fire, which despite a few missteps, is a delightful return to form and absolutely a high point in her long and established career.


Stretch Limousine on Fire is out August 30 on Compass Records. For more information, please visit www.catiecurtis.com for details about Limousine and Curtis’ to