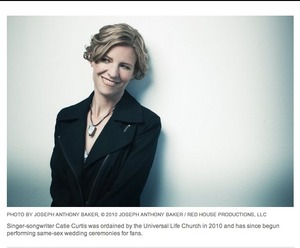 Most people know Catie Curtis as a singer-songwriter, but, recently, she's taken up a second avocation officiating marriage ceremonies for same-sex fans.

"So many people come to shows and tell me how they met or they came to one of my shows on their first date ... the opportunity to support them in getting married, whether it's legally possible for them or it's a commitment they're making in their hearts, I'm really happy to be part of that."

Curtis, who has just released the new album "Limousine on Fire" (Compass Records), has performed three marriages since she was ordained by the Universal Life Church in late 2010 and has several more scheduled later this year.

Curtis and her wife, who both live in Massachusetts, were legally married in 2005, but Curtis dates the marriage back to 2000, when the two made a spiritual commitment to each other. The couple also have two children.

"It's been a very emotional and wonderful thing to be able to do. It's kind of my way of standing up for them. I am legally married, but in so many places where I play they're even uncomfortable using the words 'marriage' or 'wedding' ... "The main thing that I'm interested in is being a voice and a presence that can strongly support anyone wanting to make the commitment to the person they love."

Curtis released her song "I Do" away as a free download on the day that gay marriage became legal in New York.

Curtis grew up in Maine and began writing songs when she was a teenager.

She says it was Rickie Lee Jones' song "Chuck E's in Love" when she was about 15 that really sparked her as a songwriter.

"The thing about 'Chuck E's in Love' was it's such a character sketch and to see it so vividly. There was such a clear vibe to that song, that whole (album). It had a huge effect on me. I think since then I've modeled my writing on that."

It was also the first song that Curtis learned on guitar.

She was initially influenced by James Taylor, Melanie and other popular singer-songwriters. Later, at Brown University, she saw Suzanne Vega and realized Vega was doing exactly what Curtis wanted to do.

"I was sort of a closeted gay kid in high school and playing music was a way to express my passion and over the years I've been able to express myself and also reflect what other people go through," says Curtis. "As a woman who has kind of a strength and desire to speak about equality, I've been able to express political messages and messages of reconciliation and love, things that I'm not necessarily articulate about in my speaking, but I feel I can communicate it through my music."

She released her first album in 1995 and her new album is her 11th.

"The easiest thing for a songwriter at the beginning is to write your one little story and when you start out it's a love story. As you mature as a writer, you start taking on more challenging topics. On this record I'm taking on topics like marriage and mortality and forbidden desire — issues that are more difficult to write about and I was happy that I was able to write about them for the first time."

"For me, the whole experience of recording it was very passionate and emotional. It has more of a raw, edgy sound to it and people have responded to that."

Curtis says that some people seem surprised when they've known her as a shy quiet person and she gets onstage and seems confident.

"Whatever that thing is, I've always had that," she says.

As an artist, though, Curtis can tell that she's growing.

"I feel like I've never been as focused and as passionate about my music as I am now."

And if she has a song that needs to make a point, she knows the best way to do it.

"I've always been a storyteller first. People are much more moved by that than being instructed on how to feel. I've never been interested in that."