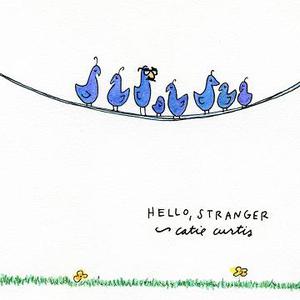 Catie Curtis. Hello Stranger. Compass Records.
When the singer/songwriter movement boomed in the mid-1990s, Catie Curtis
was at its core. A veteran artist with a 15 year career, Curtis has recorded nine
solo albums and has toured with the Lilith Fair as well as Dar Williams and
Mary Chapin Carpenter. Her songs have appeared in numerous television shows
(Dawson's Creek, Felicity, Grey's Anatomy and Alias) and independent films (500
Miles to Graceland, A Slipping Down Life). And in 2009 she was honored to be
selected to perform at the Obama inauguration in Washington D.C.
Over the years, Curtis' many fans have requested stripped down version of her
classic songs, capturing the spirit and intimacy of her live shows. With Hello
Stranger, Curtis achieves that career goal. The album, recorded in Nashville,
features Curtis in the company of a select group of Nashville all-star pickers
including Stuart Duncan (fiddle, mandolin), Alison Brown (banjo), Todd Phillips
(bass), George Marinelli (guitar/mandolin/dobro) and Kenny Malone (percussion)
on re-workings of some fan favorites as well as a few choice covers. Guests
Darrell Scott and Mary Gauthier dropped by for vocal appearances on several
cuts, and the resulting album is reminiscent of Steve Earle's Train A Comin'
project in its intimacy, and shows a side of Curtis' musical persona never before
captured on CD. Highlight tracks include the Curtis chestnut "My Dad's Yard",
the title track "Hello Stranger" (featuring a duet with Mary Gauthier) and a cover
of the Cat Steven's Track Titles s classic "Tuesday's Dead."