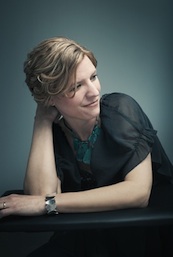 BIO: Catie Curtis delivers some of the finest material of her career in Stretch Limousine on Fire, ten original songs that push at her own musical boundaries and explore "the difficult edges of passing events" in life.  Produced by Lorne Entress, the new recording is spirited, unique, and a vivid portrayal of universal life experiences, wrapped in the same brand of evocative songwriting that won  Curtis the Grand Prize in the 2006 International Songwriting Competition.  The sound, like the subject matter, is rawer than Curtis' previous work, which has been featured on episodes of Grey's Anatomy, Dawson's Creek and several other hit shows.  Since the release of her last album in 2009, Curtis has toured extensively, playing a number of diverse venues ranging from Chicago's legendary Old Town School of Folk Music to a shows at the White House in 2010 and 2011.I've taken on a new challenge! I'm joining with Americans United for Separation of Church and State in a country-wide "house concert flashmob"... I am producing at least 51 house concerts over the weekend of September 28-30th, one in each state, and one in DC (!) to raise funds and awareness about the importance of securing religious freedom by keeping the church-state wall intact. We need hosts, performers and "concert captains." Please click here catiecurtis.wufoo.com/forms/voices-united-house-concerts/ to get involved!  And check out www.au.org to read more about A.U.

I’m excited to report that my songs are being used in two very cool in-the-works projects.  One is a film called “Mississippi I Am” (produced by Katherine Linton) about LGBT youth. "People Look Around" will be in that one.  The other project is a trailer for a cool new book called “Here Come the Brides.”  My song “I Do” is featured. The book is available at Amazon.  I will let you know when the trailer is posted.

I am officiating several weddings/celebrations in the coming months.  Most often I sing a couple songs as well, and it's something I enjoy very much.  If you'd like to have me stand up for you, write me at Celebrations@CatieCurtis.com.

See you out there,
Catie