I'm writing from the airport in Minneapolis (wireless technology is blowing my mind).  I'm headed home after a five day tour in Wisconsin and Minnesota, during which I was joined by Duluth MN singer/songwriter and fiddler Rachael Kilgour.  The Three Altos (fabulous folk trio also from Duluth) opened last night's show in Minneapolis, and our pal  singer/songwriter Edie Carey showed up and joined us for post-show celebrations.  This morning I stopped by Minnesota Public Radio for an interview and then straight to the airport-- I'm looking forward to a little napping on the plane!  Lots of March dates are still to come, among them  a southern swing beginning on March 9, and a double bill with political satirist/comic Jimmy Tingle in Somerville MA at Jimmy Tingle's Off Broadway Theater .   And it's a good time for political satire.  If we don't laugh we'll cry.  Join me. 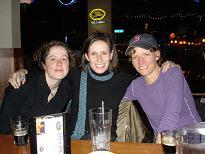 On the recording front, my producer Lorne Entress and I are really excited about how the latest overdubs are sounding.  After weeks of tracking the basics (rhythm section, bass, guitars and vocals), we're enjoying the process of adding touches of beauty here and there.  Kris Delmhorst sang and played cello, Mary Chapin Carpenter and Chris Trapper sang gorgeous harmonies, John Jennings played some very groovy guitar parts, and we'll soon have Erin McKweon in for some harmony singing.  Ben Wisch is set to mix next month and I'm planning an August release.  The working title is "Long Night Moon," but I'm a gemini so this could change many times before then.